Posted on March 17, 2016 by Christine Anderson — Leave a comment 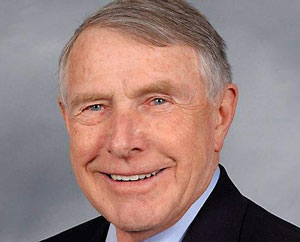 Martin Olav Sabo, a longtime congressman from Minnesota and a strong supporter of transportation research, technology, and education, died March 13.

“Sabo was a national leader on transportation issues,” says Laurie McGinnis, director of CTS. “He was instrumental in bringing funding to Minnesota for investment in MnDOT’s Minnesota Guidestar program and the U of M’s Intelligent Transportation Systems Institute. In recognition of his important contributions, CTS honored him with our Distinguished Public Leadership Award in 1999. He will always be remembered with great fondness and respect.”

Frank Douma, director of the State and Local Policy Program (SLPP) at the Humphrey School of Public Affairs, shares his remembrances:

“At the Humphrey School, we are forever indebted for the funding he directed to the fledgling SLPP. As Sabo stated himself, he directed funding to SLPP for work on intelligent transportation systems and, subsequently, congestion pricing in the mid-1990s with the intent of building expertise in transportation policy that could sustain its work into the long term.

“Aided by this funding support, SLPP rose to be a leader in transportation pricing discussions to the point of securing its own competitive funding. And, perhaps most importantly, this funding provided support to scores of Humphrey students, including me, as they launched their own transportation careers as SLPP research assistants.

“Over time, Mr. Sabo supported a number of different activities at the Humphrey, with the most lasting coming after he retired from Congress. The goodwill he generated during his career led to the establishment of the Sabo Lecture Series and Fellowship at the Humphrey School, allowing Humphrey students to continue to benefit from his work, whether from hearing the wisdom of other public servants or even direct financial support. He was truly an example of a person who preferred to let his actions speak louder than his words, and they will continue to speak for many years to come.”

For other remembrances of Sabo, read a post from the Humphrey School of Public Affairs, an obituary in the Twin Cities Pioneer Press, and an editorial in the Star Tribune.