Posted on June 9, 2014 by Christine Anderson — Leave a comment 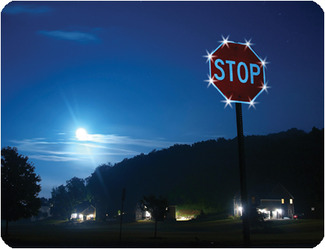 When it comes to crashes, right-angle collisions are among the most dangerous for vehicle occupants. These crashes often occur at stop-controlled intersections when drivers fail to stop, and traffic engineers are increasingly installing flashing LED stop signs—normal octagonal stop signs with flashing lights mounted on the corners—in an attempt to improve intersection safety.

A study by researchers from the U’s civil engineering department and Minnesota Traffic Observatory aims to give traffic engineers a clearer picture of the safety benefits of flashing LED stop signs. The research team conducted a two-pronged investigation of the signs’ safety effects: a statistical study to estimate crash reduction and a field study looking at drivers’ behavior changes after the installation of a flashing LED stop sign.

For the statistical study, the team compared the frequency of crashes after the installation of flashing LED stop signs at 15 intersections with a prediction of what the crash frequency would have been without the signs. Findings estimate that the installations reduced right-angle crashes by about 42 percent.

For the field study, researchers collected video data before and after the installation of a flashing LED stop sign in Chisago County, Minnesota. They then analyzed the video to determine driver stopping behavior and vehicle deceleration rates.

The team used their findings to create a decision-support tool that can help traffic engineers decide where to place flashing LED stop signs. The tool can be used to determine whether right-angle crashes are a problem at a selected intersection and to predict the crash reduction expected from installing the flashing sign.

Read the full article in the May issue of Catalyst.